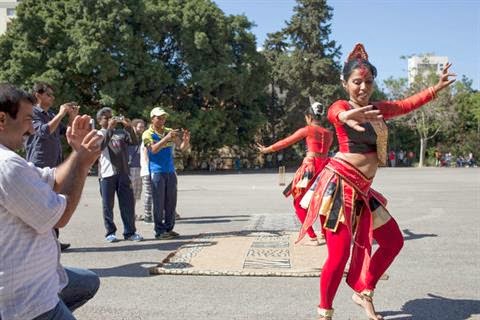 BEIRUT: "Out!" The shout echoes across the sunny car park, and from the edges of a painted cricket field, clusters of spectators clap or shake their heads according to their nationalities. A Sri Lankan batsman walks off into a crowd of teammates eager to dissect what went wrong.On the outskirts of the crowd, Nour Haidar shuffles along in a line of people under a tent and scoops a spicy looking stew of various sized lentils onto her plate next to a vibrant cucumber and tomato salad.
"I don't normally watch cricket," she says with a sigh, "unless my boyfriend has it on the TV – which can be quite a lot."

She picks up a large dumpling-esque pastry filled with spiced potatoes and takes a bite.
"But this festival is amazing, I wish I had known about it before."
Cricket tournaments are hardly anything new in Lebanon among the country's largely Asian…
Post a Comment
Read more

BEIRUT: It seems security tensions in Lebanon and the region are not so serious as to keep well-known international performers from coming to perform at Lebanon’s summer’s festival.
The curtain will open on the 16th edition of the Beiteddine Art Festival June 26, when Lebanese diva Majida al-Roumi will take the princely palace’s main stage. The vocalist is expected to perform a selection from her best-loved tunes, such as “Bakeer Falayt,” “Lebnan” and “Nashid al-Hob,” among other favorites.

More than just a pop culture figure, in her role as U.N. Goodwill Ambassador Roumi has also made numerous public appearances in aid of various humanitarian campaigns. Over the past few years she has performed with such international artists as Spanish tenor Jose Carreras and Senegalese singer-songwriter Youssou N’Dour.